The Art of
Storytelling And Metaphors for Business

Using Storytelling and Metaphors for business is one highly effective and innovative approaches we can use. It is not difficult.

Using story telling you can generate a lot of ideas in a short amount of time. Within a group you will find that people are more conducive to participate - what could go wrong with a story?

"You cannot compare apples with oranges"

"I see this with a laughing eye and a crying eye"

"Is this a Trojan Horse?" describing any situation where something great seems to be arriving but realising there may be a dangerous outcome involved.

"If you want to know if you are a good leader, turn around and see who is following you" 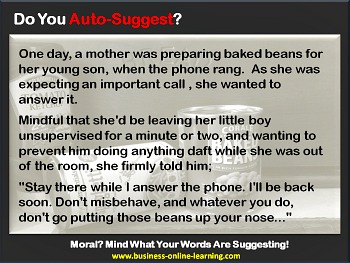 "A man was walking down a street, late one dark night when he noticed another man searching for something under a street light.

He stopped up and inquired whether everything was alright and if he could help. To which the searching man replied: "I am looking for my wallet that I lost a couple of hundred meters away".

"Then why look here?" asked the puzzled man.

"Well, I can see better here" was the reply he got. 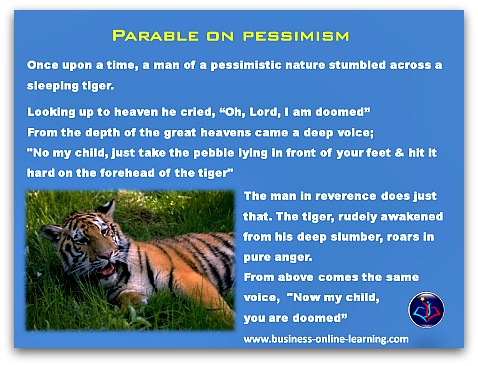 A man once told a lie about someone.

Feeling bad, he went to the wise man to ask what he could do to make it better.

The wise man told him to go to the highest mountain he could find, with a pillow full of downy feathers and to shake it, emptying the feathers into the four winds. The next day, he was to go back and gather each and every single feather up.

The man exclaimed "But I can't do that! They will be gone in all directions with the wind. I will never be able to gather them all up again".

"Exactly", said the wise man. "It is the same when you tell a lie about someone. You will never know how far it will go - or where it will land" 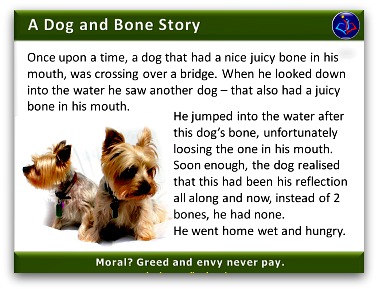 Many centuries ago, a man came across three men building a wall. He stopped up and asked the first what he was doing. He replied, "I am using these bricks to build a wall".

He asked the second man the same question and the reply was " I am earning money to feed my family".

But when he asked the third man what he was doing, his answer was,

"I am laying the foundation for a huge cathedral and one day, I will be able to take my children by the hand around this wonderful building and explain their father's role in creating it!" 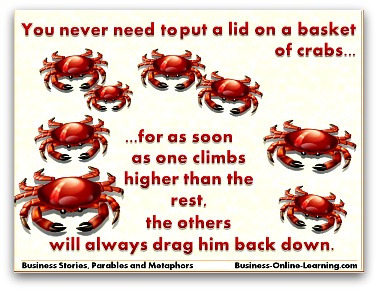 You never need to put a lid on a basket with crabs in it. For as soon as one climbs higher to get out, the others will always drag him back down.

A man was interviewing for the position of personal assistant. There were three candidates. In turn he asked each person:

"If you found a thousand dollars on the street, what would you do?"

The first candidate answered immediately, "I would go to the police station and hand it in. I would also put up some notices where I found the money, so the person who may be looking for it would know where it was". She choose this reply as a means of showing her collegiality and honesty.

The second candidate replied, "I would take the money, put up notices where I was to be contacted. If after 6 months, no-one had claimed the money, I would put it all into my savings account." She choose this answer to show her honesty, shrewdness and financial management strengths.

The third candidate thought for a moment and answered, "If I were to find the money, I would put up notices. If after a certain amount of time no-one claimed it, I would invest half of the money and have a party for all my friends with the rest." She choose to describe this approach as it had all the signs of honesty, shrewdness, financial management capability - and popularity with others.

The question is: Which one of these candidates got the job?

(I allow people a while to discuss - and enjoy the discussion that evolves.)

Moral of the story? There is no right answer if you are dealing with an unknown hidden agenda.

When I was doing research for this page, I asked a lot of people for contributions. I was actually amazed at the amount that claimed to go back to their own personal experiences.

One such story was of a person who participated in a group assessment where 25 people were invited for a group interview. Afterwards, this lady was the first to be invited out to be offered a position. Not well informed, the lady was offered a certain annual pay to which she agreed gladly.

When she came out, one extra inquisitive chap came up to her and demanded to know how much she was offered. As the chemistry between the two was not the best, she told a white lie and doubled the amount she had actually been offered.

As it happened, this chap was the next to be invited to be offered a position. Strengthened by the conversation he had just had with the lady, when it came to the question of pay, he quoted her figure - plus some. They agreed!

What's the moral of the story? Always be aware of your true value......

The Parable of Six Blind Men And The Elephant

Can you contribute to storytelling and metaphors for business?

What Story or Parable or Metaphor do you love to use in the work you do - and when does the best story shine?  (Training others, Coaching others, Problem Solving, Team building, Ice-breakers.)

Help others get ahead by sharing your story.