What Is A Pareto Analysis?

The Pareto Analysis was developed by Vilfredo Pareto (1848-1923), an Italian economist who observed that a large majority of wealth in Milan was owned by a small minority of individuals.

The so-called Pareto effect or the 80:20 rule is a widely used analysis tool. Applied to quality problems it shows that the majority of defects (nominally 80 per cent) will be due to a minority (nominally 20 per cent) of identified causes of the defects.

This analysis technique involves ranking the collected data, usually using a check sheet, with the most commonly occurring problem at the top and the least at the bottom. How much each problem contributes to the grand total is expressed in percentage and cumulative percentages are used in compounding the effect of these problems.

The ranking of the problems is usually in terms of occurrence and /or costs. Just because one problem has a higher frequency of occurrence or causes the greatest wastage costs, does not mean that it has the highest priority. The results are often presented in two ways

The Pareto Approach consists of:

A Pareto distribution is one in which the characteristics observed are ordered from the largest frequency to the smallest.

A Pareto Diagram is a histogram of the data from the largest frequency to the smallest.

Steps in a Pareto Analysis 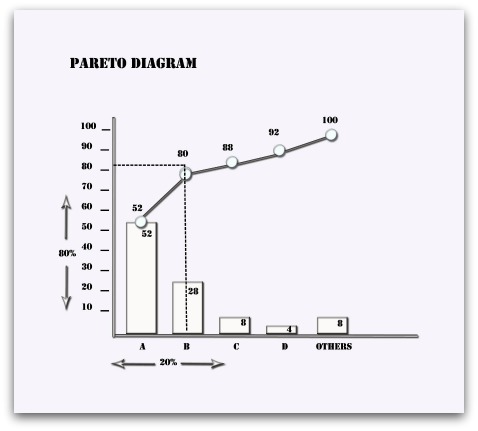 Please note that the Gremlins dragged the 20% arrow over too far. From the Pareto diagram we should see that 80% of the total amount of problems came from 20% of the known causes. (up to the dotted line).

The importance of Pareto analysis is to enable goals to be set in planning for Quality Improvements. Although a very simple analysis technique it can be extremely powerful in presenting data by focusing attention on the major contributors to a problem. This will generate ideas, efforts and suggestions, thereby giving rise to great opportunities to solve the problems at hand. Used over time, the graphs can illustrate the continuous improvements over time.

Go to top of the Pareto Analysis page 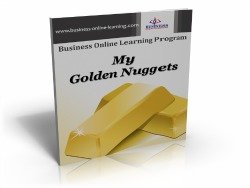