Do You Understand Power Games?

Power Games are a part of our everyday lives. We are only human.

Every workplace has its own environment and style of getting things done. When you enter a new place of work it is important to be aware of this. Power games that were invented long before you arrived will already be in play. Your success will depend also on how well you can interpret the real goings on and to respond accordingly.

I am reminded of the old adage:

and I have always found this to be a very strong piece of advice.

Some people are born “Street-wise” and know intrinsically how to respond in the light of these power games, others, like me, have to learn it and this is why I decided to add this page to my website. For other poor blue-eyed innocents like myself.

There are those who are street-wise, clued-in, on the ball. They will recognise who the important people to talk to. They recognise who to agree or disagree with, which meetings are the important ones to go to – and so on. They may not be experts in their own field but by “playing the game right”, they will have a better standing, effortlessly achieved.

This article is to help you be aware of these issues going on and to help you further yourself in your career – at the very least to avoid some mistakes that could be very costly.

Power can be varied in its expression. There are six main areas from which power is achieved or expressed.

This is the power held by someone whose position is higher or stronger than the others. “He’s the boss”-power. Indeed, HR typically have positional power in a company as they have the keys to the gates whether you are hired, fired, promoted, awarded or otherwise. Their position in a company is very strong.

“Information is key, but Knowledge is Power”. This power type will range from the Unique Selling Advantage your competitors will have over your company because of their experts to the type of power that some people will exert because they simply know more than you do. Knowledge and expertise power will also include the area of access to Patents or licensing.

Networking is the modern form of management and marketing because Personal Influence can play such an important role. Who hasn’t seen the importance of Personal Influence at play in such areas as Politics, the bank disasters that took place in many European countries. This power type is a subtle but very present one and it is a power type it is very important to be aware of.

One of the most important aspects of the culture in any organisation is how that culture is expressed in stories and symbols. Once Networks and gossip groups have formed an opinion, this is very hard to change. This can influence the decision makers who will decide to back you or work adversely in some project you may be aiming for. The power of the “that’s not the way we do things around here” is never to be underestimated.

Think of any great boss you may have experienced. They probably reached this status because of their energy and staying power. Charismatic leaders are often distinguished by their energy that can be infectious. People also have a fascination with those who do a lot, at the very least they are exciting to watch and they will have a following. Think of the athletes who by virtue of their power and stamina simply have the power to sway our opinions. For this reason many athletes are very wealthy from the income they get from advertising brand names.

From an excellent book called I have found the following mapping exercise, useful if you are trying to introduce any change in your business.

Describe the people who will be involved or will be affected by what you want to introduce, to form a basis for understanding the power games taking place.

List their interests and then the type of Power they have - or find important.

List these in a table with three columns with the following headings:

After filling out the table, you may want to reduce your list by ranking the importance of the people in groups of critical people, important people and less important people.

This will give you an idea of the people playing the Power Games and what type of power they use.

Now assess, in your own opinion, what the tendency of these people is likely to be, with regard to the change you are about to make.

1. Are they going to be Supporters or Resistors?

2. How you would rate their power in this situation? High or low power?

Now mark your people onto the following Micropolitical mapping diagram. 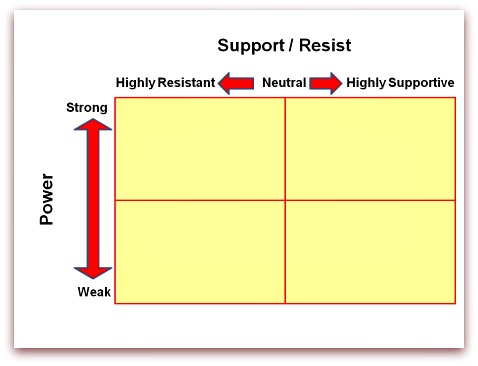 Now how does your situation appear? Are their many in one group in comparison to another? Is there a critical mass of support for your change or does it show solid ranks of resistance.

Dealing with the Results

This short Micromapping technique will highlight the Power Games that are likely to affect you, so it is important to deal with the results..

-          How will you deal with the resistors? Perhaps you haven’t fully communicated the benefits of the change you are trying to introduce? Have you fully understood their objections? What can you do to change their stance on this matter?

-          You could ask powerful supporters to approach the people or groups resisting to “get them on board” or at least to reduce their resistance.

-          Is there a point to enable those who are supportive but weak to become stronger? Maybe as a group they will become stronger through their joint identity? Can they be made more powerful in any way?

START PLAYING THE POWER GAMES WITH A SENSE OF AWARENESS and if all else fails, follow Winston Churchill's advice: 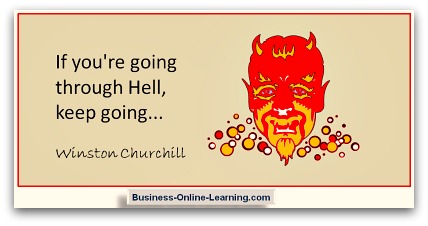